The latter half of 2017 presented a tense waiting game for local retailers as Amazon covertly began the set up and roll-out of its Australian operations. However, many retailers have since breathed a sigh of relief with the global e-commerce giant’s somewhat low-key entrance into the local market.

While retail experts reported that the launch was deliberately understated to allow Amazon to test systems and logistics before rolling out more products, services and lower prices over the next year, many may have still jumped the gun in their pessimistic outlook on the future of retail—particularly in regards to the assumed death of bricks-and-mortar stores.

To be fair, it’s a hard attitude to ignore. In the United States, Amazon has gobbled up five per cent of total retail sales and some expect the company will own half of the online market within the next five years. This is a period during which Credit Suisse predicts a quarter of all shopping centres in the US will close.

However, we know that for the vast majority of Australian consumers, price is the most important factor when shopping (82 per cent) followed by quality (63 per cent). The physical store is the most frequently used channel with two thirds (66 per cent) of shoppers preferring to purchase in-store all or most of the time. While this doesn’t detract from the fact that retail is under huge pressure, it demonstrates that physical shops still have a future, and that for savvy retailers there is more opportunity to create fresh, local alternatives.

While e-commerce giants will continue to disrupt the market, an increasing number of retailers will discover new ways to respond. In the age of Amazon they will need to leverage their unique assets that e-commerce players don’t have.

Shoppers want to touch and try

Looking ahead to 2022, we expect that in-store, human interaction will remain an important aspect of the retail experience for Australian consumers. In a recent Salmat study we found customers prefer to touch and try products before they buy and are not interested in virtual experiences. Furthermore, offering customers the opportunity to sample items gives marketers the ability to deliver something tactile, which in turn has positive effects on the recipient’s memory, emotions and behaviour.

For example, Coca-Cola’s No Sugar Australian launch was the company’s largest ever sampling campaign, whereby it distributed more than two million free samples of the new No Sugar beverage to consumers. Coca-Cola used influencer activity with Kelly Rowland, Snapchat ads and digital content via its social channels as well as sampling at major sporting events including the State of Origin and a takeover at the MCG during popular AFL matches. It also created a voice-activated panel that enabled consumers to ‘say yes’ and redeem a free sample straight from the refrigerated panel. This is one example of how retailers can create experiences where online and offline intersect to meet the needs of consumers—in a way that pure-play online retailers can’t.

The success of large e-commerce players can in large part be attributed to their data strategies and personalisation tactics. However, the balance between privacy and personalisation is still major a concern for many consumers, who are not willing to share their personal information, particularly online.

Interestingly, our research found that over half (58 per cent) of shoppers are open to retail shopping assistants suggesting products and services in-store based on their personal information and purchase history. Adidas’ recent Knit for You campaign, for example, allowed shoppers to have products designed, specially fitted and manufactured in-store within a matter of hours as part of a major personalisation drive intended to respond to changing fashion trends and help close the gap with Nike. 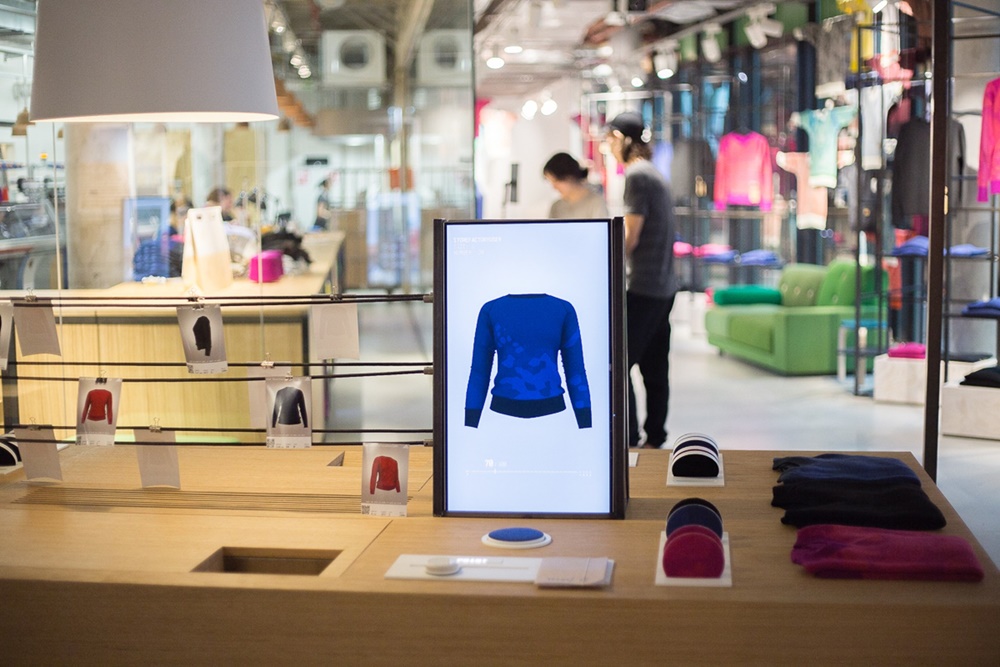 Adidas’ ‘knit for you’ concept store in Berlin.

In its analysis of the campaign, Adidas found that by offering more personalisation to customers it could better respond to fickle fashion trends and sell more of its products at full price. As shoppers are more comfortable with personalisation tactics if they are used in-store rather than online, this is another way physical retailers can create unique experience and engage with their customers.

As customers increase their time online, every interaction leaves a digital footprint and is an opportunity for marketers to better reach, convert and serve them. Smart businesses like Coca-Cola and Adidas are using implicit, implied and non-intrusive data collection techniques to create engaging campaigns in a way that consumers can respond positively to and overcome those not interested in supplying their personal information.

The argument suggesting in-store retail will eventually decline or die is by no means the reality. Humans are essentially descendants of hunter-gatherers, and we still desire the ‘thrill of the hunt’, which translates today to touching, feeling, and experiencing products in a physical space. Online is an important component of the retail mix, but in-store will continue to be the central hub for consumer interactions and shopping experiences. Retailers ultimately need to remember what made them special in the first place. If commentators are right and the industry continues to decline, then what we’ll really be losing is the art of creativity, and the art of selling.

Dan Salter is the retail business consultant at Salmat.