Woolworths rewards members with iPhones will soon be able to say goodbye to carrying a physical loyalty card, thanks to an alliance between the retailer and Apple.

As reported by The Australian Financial Review, loyalty members will be able to collect and redeem points using Apple’s digital wallet, Apple Pay, by presenting their iPhone at point-of-sale.

Woolworths’ head of digital and payments, Paul Monnington, told The AFR this is just the start of Woolworths’ digital wallet journey and a way of creating better customer experiences.

“We’re seeing growth in digital wallets across our stores and that will increase as there’s more functionality, not just payments,” Monnington said.

So, what exactly is a digital wallet? Here’s what you need to know. 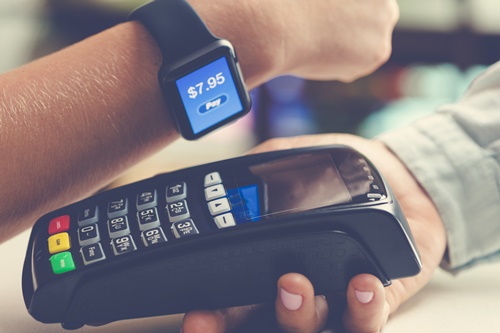 What is a digital wallet?

A digital wallet is an app that stores credit or debit card information. It can be used to make contactless payments with a device—generally a smartphone or ‘wearable’ like a smart watch—at a point-of-sale just as you would using a ‘tap-and-go’ card.

Digital wallets can also be used when online shopping. They are generally accessed with a username and password and make the ecommerce experience quicker and easier by saving shoppers from having to enter personal and card information every time they want to make a payment.

Some of the digital wallets currently available in Australia include Apple Pay, Android Pay and Samsung Pay.

If you can accept contactless card payments in-store then you can accept digital wallet payments. They work using the same near field communication technology.

For ecommerce retailers, it depends on your payments platform. PayPal payments service Braintree recently announced it was bringing Apple Pay and Android Pay to its Australian merchants. This means ecommerce retailers using Braintree can now give their customers the option of paying using a digital wallet.

Carolyn Breeze, head of Australia at Braintree, said the development was about making the online payment experience as frictionless as possible, particularly as more Australians are shopping via mobile.

“What Braintree is about is making sure consumers can pay in a way they want and that retailers can process that,” Breeze told Retailbiz. “Everything is becoming more about convenience, and speed is king.”

Breeze said not offering the payment option your customers prefer is a “huge deterrent” that could prevent them from purchasing.

“Depending on the customers you’re looking to support and acquire, it’s important to give them relevant options, particularly for mobile-driven experiences… It’s really important that retailers stay ahead of customer trends.”

For retailers selling online, offering payment through digital wallets can also be a way of acquiring new customers, especially if you want to expand globally.

“Wallets themselves are becoming hubs of innovation and are growth places for retailers to look at acquiring customers,” said Breeze. “For example PayPal has over seven million users and is a trusted wallet, so for retailers that want to expand online or go global, wallets are a really secure way to do this.”

As Apple has its own digital wallet, Apple Pay, the tech giant doesn’t allow third-party providers to offer their own digital wallets on the iPhone platform. It locks them out by blocking access to the near field communications technology that facilitates the contactless payments.

To get around this, in 2016 four of Australia’s largest banks—Westpac, National Australia Bank, Commonwealth Bank and Bendigo Bank—attempted to join forces and collectively negotiate with Apple to get their digital wallets onto iPhones.

However the Australian Competition and Consumer Commission knocked back the request, meaning the banks will have to negotiate individually.

ANZ Bank was not part of the group as it negotiated its own deal with Apple, which allows the bank’s customers to add their ANZ cards to Apple Pay.

Commonwealth Bank and NAB offer a workaround for their customers. Users can pay in-store using an iPhone by purchasing a PayTag sticker that attaches to the back of their phone.

All members of the big four have their own Android payment apps, while Westpac and ANZ also offer Samsung Pay.

Do digital wallets mean the end of cash and cards?

In short, probably not any time soon. Although a November 2016 survey by the Reserve Bank found Australians are continuing to switch to electronic payment methods, the take up of digital wallets is minimal. In fact mobile payments accounted for just one per cent of point-of-sale transactions over the week of the survey.